Tallents Solicitors are delighted to once again be sponsoring the Christmas pantomime at the Palace Theatre Newark for the third year in a row. This year the panto will be Snow White And The Seven Dwarves.

Said partner, Alistair Millar: “Community is very important to Tallents and to Newark, so we leapt at the chance to sponsor the Christmas pantomime for the third year in a row. We’re absolutely delighted that Bernie Clifton will be returning to delight the people and children of Newark once again.”

At the panto launch on 27th August 2013, the centre of Newark came alive when the cast of this year’s Palace Theatre pantomime took to the streets to promote the production.

Comedian Bernie Clifton, who will play Muddles, talked to passers-by as he and his colleagues made their way to the Market Place on Tuesday and then to Newark Castle. He was joined by Eurovision singer Nicki French as Wicked Queen Grizelda, Victoria Scott as Snow White, Keith Gilmore as Prince Valiant and The Tozer Dancers as The Seven Dwarfs. Missing from the pantomime launch was Adam Daye as Dame Dolly Dumpling. 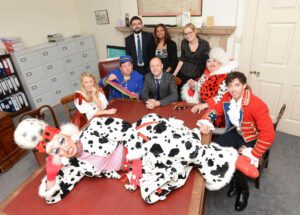 The cast took full advantage of every comedic moment as they posed for photos in Tallents’ Newark offices.

Bernie said: “It is wonderful to be invited back to a venue for a third year and the Palace does feel like my home now.

“I can’t wait to be playing Muddles, the village loon, who everyone loves. I may be the only member of the cast to have his bus pass but I can still do the same tricks as those on stage with me who are a lot younger.

“Panto makes me feel young, but playing Muddles will be a very demanding role, requiring all my strength. Oswald, my faithful ostrich, will be back, in some shape or form.” 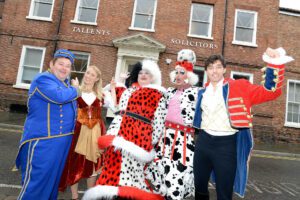 Snow White And The Seven Dwarves, is directed by Peter Dayson with musical direction by Matt Marks. Sponsored by the Newark Advertiser, Tallents Solicitors and Newark and Sherwood District Council, it runs from December 5 to 31.

What to do when someone dies - A guide to probate