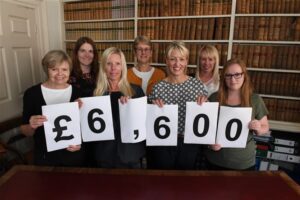 More than 50 people have taken part in the scheme to have a Will drawn up by in return for a suggested donation to Beaumond House rather than the usual solicitor’s fee.

Sarah Allen, a solicitor with Tallents Solicitors in Newark, said they were pleased to help Beaumond House.

We are a long-standing Newark-based firm and we like to support local charities,

Sarah said a lot of people seemed reluctant to make a Will and did not realise the importance of making one. She was pleased that so many people had taken the opportunity to have one drawn up and raise money for the Newark hospice at the same time.

We are delighted with the amount raised,

Having a professionally-drafted Will can avoid difficulties for loved ones in the future and seeing a solicitor enables you to obtain a wealth of advice to ensure that all your affairs are in order.

Fundraising and marketing manager for the hospice Cathy Lowe said it was a wonderful offer by Tallents Solicitors and she was pleased the initiative had been successful.

It has involved a significant amount of time and resources and so we are grateful for everything they have done,

Delighted so many more people now have a Will

Cathy said she would have been pleased if only a few people had decided to get a Will so was delighted that so many had done so.

This very generous offer seems to have triggered so many people into doing something that perhaps they have been putting off,

The Will-writing promotion also gave people the opportunity to think about leaving a gift or legacy in their Will for Beaumond House.

The hospice needs £1m each year to function, of which a quarter is provided by the NHS with the rest funded by the local community and businesses.

This article first appeared in the Newark Advertiser, written by Lucy Millard.

What the latest septic tank regulations mean for you

Divorcing with dignity and ending the blame game