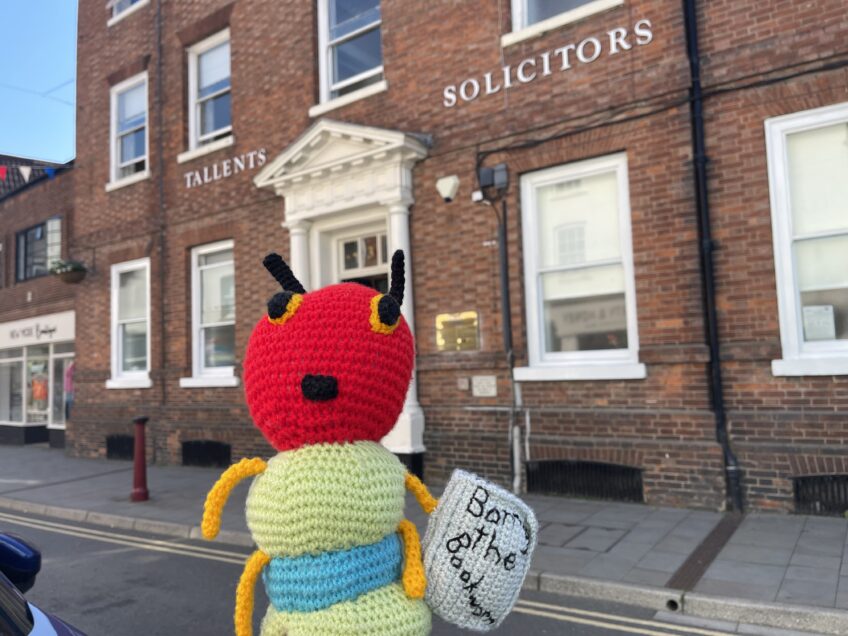 The mascot for Newark Book Festival, Barry The Bookworm came to visit Tallents Solicitors, who are the Children & Young Person Programme sponsor this year again.

And oh my, what a time he had making lots of discoveries! Here’s what he got up to.

Barry was amazed to learn that Tallents Solicitors were established in 1774, making them one of the oldest legal firms in the Midlands.

The Senior Partner, Alistair Millar welcomed Barry to Tallents Solicitors and showed him some of his files. He has a lot of work on but took time to have a photo with Barry.

Alistair’s secretaries also had an awful lot of work on but they let Barry try his hands at dictation and typing. “Even though I’ve got four arms, I couldn’t type as fast as them! Look at all the files they have to work on!,” said Barry.

His next was a trip to Partner, Andy Stout’s office where he was in Bookworm Heaven! Andy had lots of legal books and let Barry take a closer look at them. The oldest was from 1895 but Barry didn’t understand much of the content. He also got to look at some old paperwork from 1945 for the sale of lots of properties around Newark by the Newcastle Estate. Barry didn’t know that some of the books folded out into maps of Farndon and the surrounding area, so that was really interesting. He was also shown some Indenture papers which were hand written in 1608! They were very delicate and had lots of old wax seals attached to them.

Barry also spotted that Tallents Solicitors have raised over £60,000 for a charity called Will Aid since 2015 and their Private Client team raised over £7,000 last year too!

Tallents Solicitors were kind enough to give Barry a new pen to use to write in his Diary, plus some keyrings. All in all, it was an exciting day for Barry and with all the very old books that they had, it was Bookworm heaven! 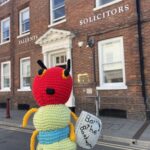 Barry was very excited to be visiting one of the oldest law firms in the Midlands – Tallents Solicitors. 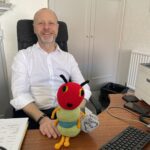 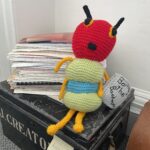 Barry took a look at some of Alistair’s piles of work! 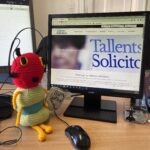 Barry listened to some of the dictation that Alistair’s secretaries had to do. 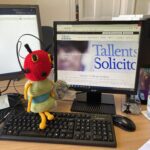 And he tried to do some typing too, but even with four arms and hands, he couldn’t keep up the pace! 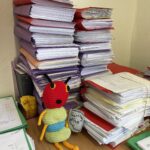 Phew, that’s a lot of work that the secretaries have to do! 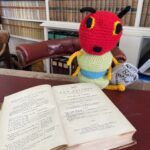 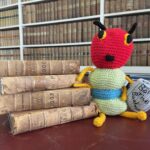 There were lots of old books to fascinate Barry in Partner, Andy Stout’s office. 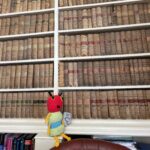 Gosh, so many old books to read! 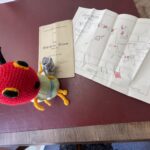 Here’s Barry looking at some sales details from 1945 for lots of old building in Newark which where being sold then. 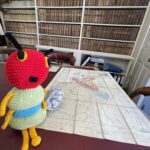 How fascinating, a book that folds out into a map of Farndon and Newark! 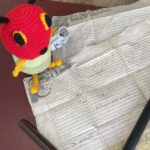 Barry was fascinated by the Indenture papers which were handwritten in 1608! 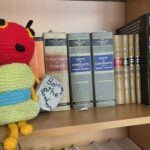 Barry also has a nosey in Partner, Stephanie Whitchurch’s office and found some modern law books on her shelves. 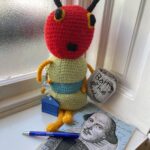 After a busy day of typing, dictation and reading, Barry left Tallents Solicitors with a brand new pen to write in his diary. Thank you for visiting Barry! 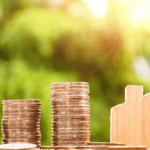 Tallents Solicitors supports grants for the Arts in Newark 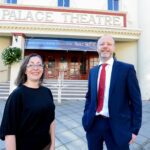